‘It’s NOT inspiring!’ The Project’s Meshel Laurie SLAMS those praising Kate Middleton for being back on her feet just hours after giving birth

The Duchess of Cambridge left the world in awe on Monday when she posed for pictures with her newborn baby just seven hours after giving birth.

But on Tuesday night’s edition of The Project, panelist Meshel Laurie claimed it was ‘troubling’ that people were praising the new mum for being back on her feet so quickly.

‘You know what I find troubling is all those young women saying, ‘Oh, it’s inspiring’. That’s not inspiring!’ she slammed in a segment about the royal birth.

Meshel continued, stating: ‘You know what would be inspiring? If when they came into her room and said ‘Alright mate, up you get, hair and make up, let’s get out there’ she said ‘Don’t be an idiot, get out! I’ve just had a baby!”

As the audience clapped, co-host Carrie Bickmore jumped in to defend the Duchess, saying: ‘Maybe she doesn’t have that option!’

‘She DOES have that option! Mate, what are they going to say?’ Meshel retorted. 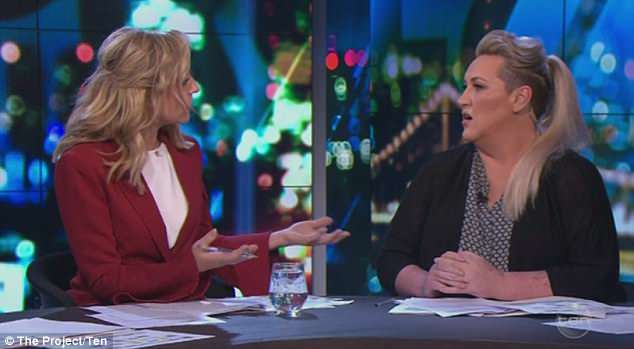 ‘She needs to hold on to the sides of the bed and say ‘GET OUT!” the comedienne continued.

Earlier in the segment, during a live cross to London, UK correspondent Lucy McDonald claimed England had been left ‘in awe’ of Kate and her seven hour turnaround.

It appeared Carrie felt a twinge of sympathy for the new mum, saying: ‘The expectation on that poor girl. It must suck! Seven hours after you have a baby, I was a hot mess I would not have had the confidence to put a dress on. ‘

She continued, praising the royal: ‘She does it so, so effortlessly. And I hope she gets to go home and put on some PJs and be a mum and worry about all the royal stuff later.’

After giving birth to her third child at St Mary’s Hospital in London on Monday, Kate stunned in a red knee-length shift dress with a pretty white lace collar.

The frock was by one of the Duchess’s favourite designers, Jenny Packham.